Revision as of 22:32, 6 March 2018 by Evanmcgarelcook (talk | contribs) (→‎Notes: Added tactical advice)
(diff) ← Older revision | Latest revision (diff) | Newer revision → (diff)
Edit
This article is a stub. You can help Into the Breach Wiki by expanding it.

The Firefly is one of the Vek from Into The Breach.

The Firefly shoots projectiles in a direct line, similarly to the Cannon Mech.

The Firefly is one of the more dangerous early-game enemies. Neutralizing Fireflies, Scorpions, and Leapers should be the top priority unless there is Alpha Vek on the board.

Very few starting Mechs are capable of single-handedly erasing 3 health in a single turn, so you should push/pull them into environmental hazards whenever possible. Moving the Firefly (or moving the Firefly's target) should be done carefully to avoid exposing additional targets to danger, since the Firefly's attack travels in a straight line across the entire board. 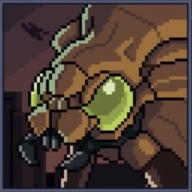