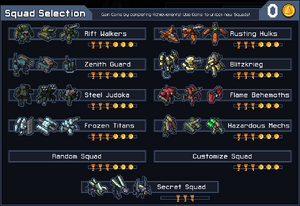 Squads in Into The Breach determine the Mechs you can take with you onto the battlefield.

You start with the Rift Walkers squad. Additional squads are unlocked by completing Achievements. Each completed achivement earns 1 coin.

Each squad has a custom paint job. Unlocked mech colors can be applied to other squads.

A Random Squad is created out of all the unlocked Mechs.

The Secret Squad becomes available after unlocking the 8 named squads. 25 Coins are required to unlock the Secret Squad. This means you have to complete all of the remaining Global and Squad based achievements.